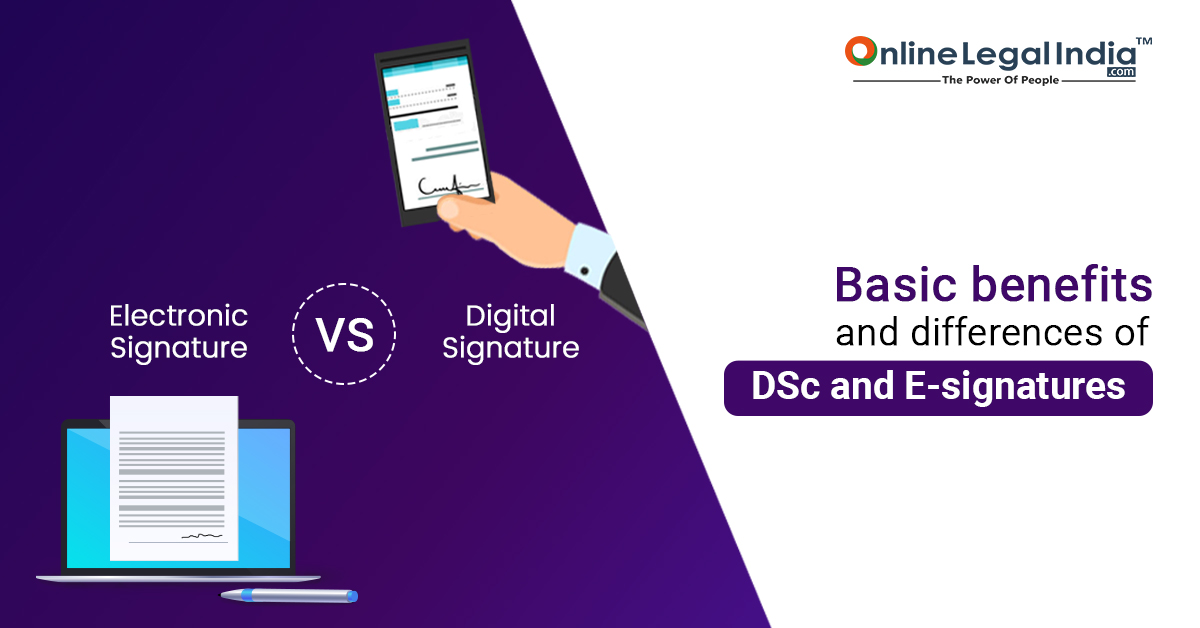 Know the benefits and basic differences of Dsc and E-signature

The use of signatures has given people a clear sense of who they are and made it possible for businesses and other people to operate more quickly while keeping up with evolving technology. The importance of signatures in helping people make decisions and give consent a far higher value is undeniable. In the past, each person or the designated signing had to read the document in its entirety before giving his or her consent. The organisations have to overcome enough obstacles as a result to follow the signatory's pace and work within his or her schedule. Authorised Signatory may not be present at a specific location but may still give his approval. Indeed, his blessing has come from technology.

In 1998, the United Nations noted that as the industrial era advanced, it had become increasingly important to create a legal framework for e-signatures due to the rise in online transactions in recent years. The creation of cyber laws was deemed to be urgent given the strict laws governing e-signature.

A person's identity is electronically represented by an electronic signature, which serves as a proof of their consent and agreement to the facts of the signature. Overall, the signature constitutes acceptance by the signer to the written form of the same electronically. Make sure it is coming from the authorised signatory and that there have been no changes made to the document.

A person's signature serves as a crucial and symbolic expression of their identity. The importance of a person's signature in the legal system and during transactions cannot be overstated. A person's signature on a piece of paper indicates that they have carefully read the entire thing, checked the facts, are aware of its contents, and are thereby endorsing it to the best of their knowledge.

A signature is important because it is seen as a sign that an offer has been accepted in accordance with contract law. Due to technological innovation, the traditional form of signatures has undergone significant change. The risk of data hacking has increased along with the use of online transactions and emails. As a result, the idea of electronic signatures has gained some significance.

An electronic signature is more of a consent to the delivered document than it is a declaration that its contents are true. It may also refer to a basic graphic that is attached to a document in order to support its text or to show that the relevant party has given its approval. Unlike a digital signature online, it is more easily altered or incorrectly constructed. Electronic signatures make it difficult to confirm the time and location of the signing; in some cases, another person may sign the given documents without being recognised. Additionally, applying Audit Logs to electronic signatures is difficult.

On the other hand,online digital signatures are more secure and difficult to tamper with. The digital signature online appears as an invalid signature if any changes are made to the document and it is sent back to the original signer. In contrast to an electronic signature, a physical signature requires a unique passkey that can only be given by the signer to the intended receiver. In the event that there is a disagreement between the parties, the signatures offer the time and stamp, which are highly important to show in court. In comparison to an electronic signature, it provides a highly imprecise identity while also disclosing the identities of the persons.

Email Signature– Anyone can easily fake someone's name or symbol by simply entering it at the end of an email or by sending a message on letterhead.

Web Based Signature– In many organisations, the Company assumes many roles in relation to the activities carried out in the Organisations; as a result, the organisation may fall victim to web-based clickwrap contracts, where acceptance is shown by the simple click of a button. Even if the party was deceived, such signatures bind them.

The expansion of increasing online transactions has given rise to a wide range of cybercrime, from deception to hidden identity. Because of this, digital signatures online are seen as being more rigorous forms of signatures that also secure the sender's identity. There are also more sophisticated solutions to stop the threat posed by electronic signatures.

The expansion of increasing online transactions has given rise to a wide range of cybercrime, from deception to hidden identity. Because of this, digital signatures are seen as being more rigors forms of signatures that also secure the sender's identity. There are also more sophisticated solutions to stop the threat posed by electronic signatures.

This includes the signatures which are digitally secured and also which have more legal weightage.

“According to section 2(1)(p) of the Information Technology Act, 2000 digital signature means the authentication of any electronic record by a person who has subscribed for the digital signature in accordance with the procedure mentioned under section 3 of the same act.”

By producing a digital signature, which is a mathematical function of the message content, it is possible to authenticate an electronic record. Such signatures are developed and validated by the discipline of applied mathematics known as cryptography. By substituting the original data with a transformed version that can be reconverted to disclose the original data only to someone who has the right key, it is used to secure the secrecy and authentication of the data.

Encryption: Transformation of a plain message into an encrypted text.

Decryption: The conversion of the original message's text into ciphertext.

Process followed for the creation of digital signature

A type of trust service provider known as the Certifying Authority (CA) is a third-party institution that is respected and recognised in a nation. It has the authority to grant citizens digital signatures. These CAs are subject to rules and regulations that they must abide by in order to function.

A digital signature certificate must first be obtained from the Certifying Authorities. Following that, the following steps are taken:

The recipient receives the original message and the digital signature. After this, there are two steps which need to be followed:

Rule 5 of the Information Technology (Certifying Authorities) Rules, 2000, explains the method of verification  of digital signature as: