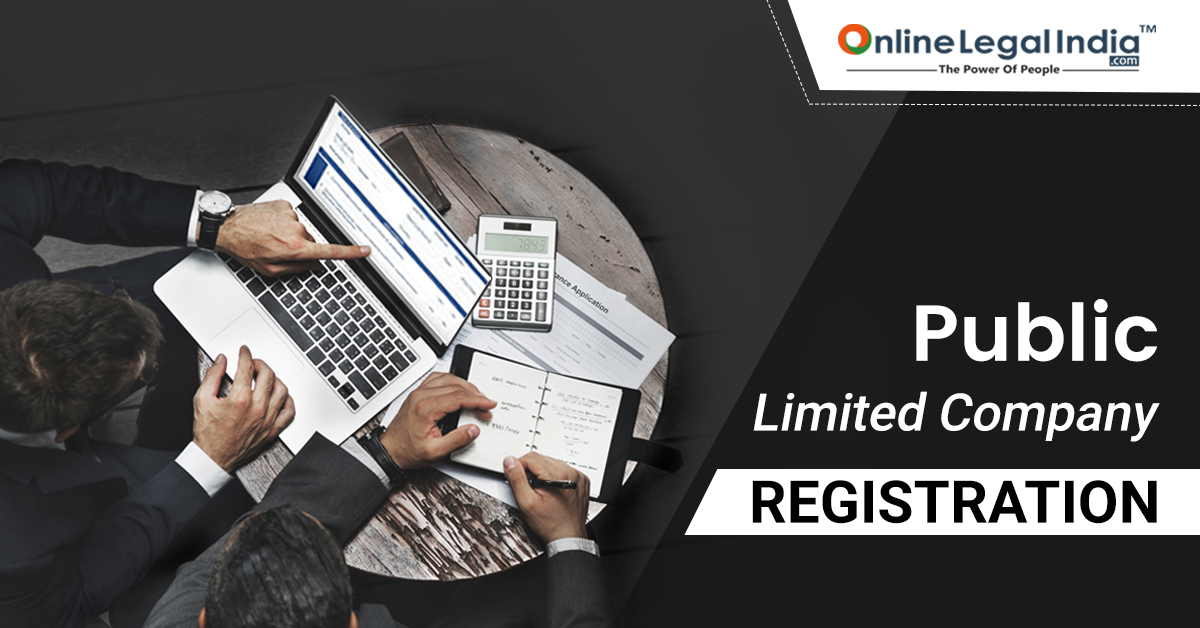 What do You Mean by A Public Limited Company?

Enlisting a public limited company in India is ideal for business owners who intend to run large-scale activities. There is no maximum number of shareholders/members that can constitute a Public Limited Company; however, there is a minimum need of seven members.

Step 1. It is required to comply with all legal criteria, including the minimum paid-up share capital, the number of directors, and the number of shareholders.

Only once this step has been finished can the registration process continue.

Step 2. The DSC & DIN for the Company's directors must be obtained next.

Only a natural person, not another person or an entity like an LLP or a financial institution, is eligible to serve as a director.

It is not required that the Director own shares of the company.

Step 3: The Company must have a valid address in order to be recognized as a registered office.

The Registrar of the Company under whose authority the office falls must have the Registered office address on file.

All business-related communication will be sent to the registered office address, so make sure you input it accurately.

The registration charge will depend on the company's permitted capital.

Step 4: The Company's name must first receive ROC approval before the registration process can begin.

The name must include the term "Limited" at the end for a Public Limited Company.

This application will be submitted through the Ministry of Corporate Affairs' RUN form.

In the event that a specific name is not available, it is preferable to submit a group of names in the order of preference.

Step 5: After the Company's name has been authorised, the MoA and also the AoA, two of the Company's most important papers, must be signed.

Step 6: The documents have to be submitted to the ROC for approval after they have been created.

Step 7: Following completion of the verification, the ROC registers the business and issues the incorporation certificate, which includes the company's CIN.

Step 8: After acquiring the COI, the firm cannot be launched right away.

Within three months of receiving the COI confirming that each subscriber has made their subscription payment, the business must file for a certificate of start.

The Companies Act of 2013 specifies the number of different laws and regulations for the creation of a Public Limited Company in India.

The following is a checklist of things to keep in mind while registering a public limited company:

There are some specific benefits of Public Limited Company Registration in India:

A public limited company is regarded as existing independently of its stockholders on a legal level.

A public limited company can have a PAN, a bank account, approvals, agreements, licences, assets, and liabilities. It also has continuous existence.

A public limited business can raise money from both people and financial organisations.

One of the main benefits of a public limited company is the ease with which shares may be transferred by shareholders to other legal entities, whether they be people or organisations located in India or outside.

For the purpose of ensuring the continued existence of the corporation, the director may also be replaced.

In the event of an unforeseen obligation, the same would solely apply to the corporation and would not have any bearing on the shareholders.

Given the organization's substantial financial base, there is much potential for growth, especially for open-constrained organisations.

The Directors' Board is in charge of the company.

The shareholders elect this board of directors.

According to Section 121(1) of the said Act of 2013, an annual general meeting must be convened.

Once the AGM has been held, Form MGT-15 must be submitted.

It is submitted using Form AOC 4.

The Annual Return, which must be submitted in Form MGT7 with the appropriate ROC, includes information on the directors and shareholders.

According to Sec 173 of the Companies Act and Secretarial Standard 1, the financial and director's reports must be adopted.

Form MGT 14 is used for filing.

These must be submitted in Form ITR 6 to the Tax Department by September 30 of each fiscal year.

According to Sec 204 of the concerned Act, r/w Rule 9 of the Companies Rules, 2014, necessitates the submission of the secretarial report.

It was filed using Form MR 3.

These include adhering to the guidelines established by SEBI.

The 2015 requirements must be followed by the listed companies.

According to Sec 173 of the Companies Act, 2013, an unlisted Public Limited Company must have a minimum of four board meetings.

The recruitment of a cost auditor

It is needed to file CRA 2 for this form.

It is important to note that the auditor should be first appointed within thirty days of the Board meeting or three months of the fiscal year, whichever comes first.

A casual job opening must be filed within thirty days after the occurrence.

The Rule 16 of the (Companies Acceptance of Deposit Rules), returns of deposits must be reported with the ROC under whose jurisdiction the firm falls via Form DPT 3.

A vacancy for a CFO, CS, or CEO

It must be filled within thirty days after the Annual general meeting or six months in the event of a casual vacancy, according to Section 203 r/w Rules 8 and 8A of the 2014 Companies Rules.

In harmony with Section 96 of the 2013 Companies Act, the Annual general meeting for the declaration of the dividend must be held.

The CSR Committee must meet four times, with a minimum of 120 days passing between each meeting used to debate and approve CSR initiatives. This is done in accordance with the Secretarial Standard, the Companies Act of 2013, and the Companies Rule of 2014.

A Public Company that has been registered in accordance with the Companies Act of 2013's regulations. The benefits of limited liability are available to members of limited companies incorporated in India, and these companies are also permitted to generate money from the general public by issuing shares.